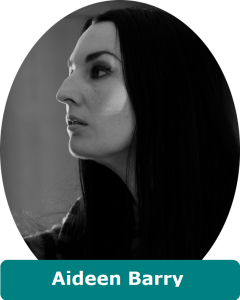 Aideen Barry visual artist based in Ireland but with an international profile. Her means of expression are interchangeable, incorporating performance, sculpture, film, text and experimental lens based media, She often employs visual trickery to create a heightened suspension of reality that comments on otherness; often collaborating with artists & communities to manifest her multi-diverse socio-political works.

She is a member of Aosdána and the Royal Hibernian Academy. Barry lectures in several universities and schools of visual art in Ireland, the US, South America and Europe. Currently her first feature film Klostés, commissioned by Kaunas 2022, is touring international film festivals including Newport Beach (USA), Oaxaca (MX),The IFI  (IRL), Galway Film Fleadh (IRL), London Festival of Architecture (UK), Cordoba Film Fest(ARG) and showing around the world at other experimental film festivals.

Her work is in prestigious private and public collections globally. In 2021 she won the Thomas Dammann Junior Memorial Trust Award, the Golden Fleece Award,  and a Project award from the Arts Council of Ireland to support her current touring body of work  the „By Slight ligaments“ touring, Okela Gallery Bilbao (ESP), The Whitaker Museum (UK) and Centre Culturel Irlandais (FRA), In October this year she was commissioned by the European Union and The Irish Postal Service An Post to create a set of stamps which are available across the EU.  In 2023 she takes up the ISCP residency in New York awarded by TBGS and she will lecture at Wellesley women’s college, Harvard. In 2023 she will undertake a residency and solo show for Salzburg Kunstverein in Austria.